A Bird on the Ground

Not all birds on the ground unable to fly are babies. Spring is definitely a time when people find and try to rescue baby birds, but just because a bird is small and grounded doesn't mean it is a fledgling. 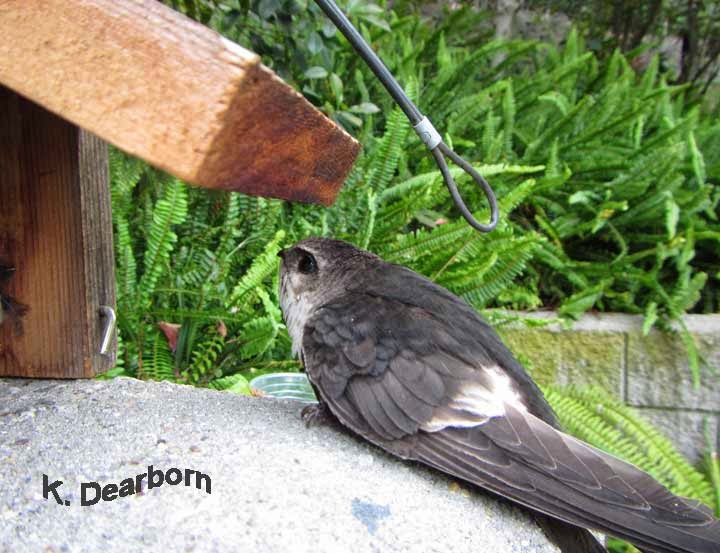 This bird was found on the ground and her inability to fly made people think she was a lost baby bird.
But this is actually an adult female white-throated swift (Aeronautes saxatalis). As their Latin name suggests most of their life is spent in the air. They catch insects in flight, drink by scooping up a mouthful of water as they swoop over a pond, and even mate in the air. Some sources cite them as the fastest flying North American bird because they have been documented out flying their predator the peregrine falcon. White-throated swifts are considered the most aerial land-based bird; they land only to nest on vertical cliff faces and sometimes freeway overpasses (man-made cliffs).
Because they are an aerial bird, swift legs are tiny with feet for gripping vertical surfaces. On the ground a swift is out of its element, it can't really walk around. This female was found in an atrium at the hospital where my neighbor works. The hospital staff gave her water in a cup and bits of cracker. Unfortunately, both were completely foreign to this bird.
Why was she on the ground? We don't know for sure. There was no sign of a predator attack.  but she most likely struck a window on the multistory hospital and then fell into the atrium surrounded by high walls.  Fortunately, she did not break a wing or come to serious bodily harm. 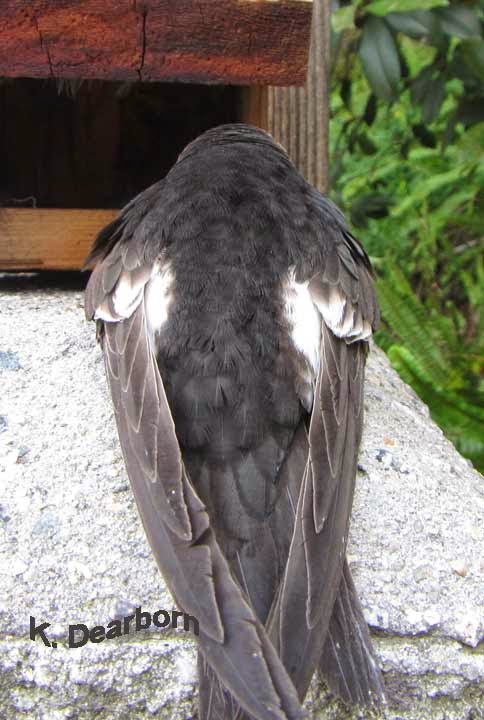 When the neighbor first handed her to me in a box, my first thought was a violet-green swallow that had fallen from a nest. But once I had her in a quiet place and could evaluate her closely, I realized the amazing creature climbing up my hand was a bird I had only seen flying high overhead–a white-throated swift. Their long pointed wings slice through the air and the white belly and white flank spot make them easily identifiable from below. Most references only depict their appearance in flight because no one is going to see them on the ground. Yet, here she was.
With a little water offered from a dropper, she drank and rehydrated. She has a short stubby beak, but her mouth opening is large. She also has a pouch in her throat for carrying insects back to nestlings.
With her gripping claws she climbed up this brick wall and she spent the night sleeping while clinging to a vertical surface, much like a bat. (Insectivorous bats and swifts have similar lifestyles; one fills the ecological niche during the night and the other during the day.)
Injured wild birds frequently do not survive long. I didn't expect her to survive the night. But come morning she was still looking at me with shiny eyes. Most rescued swifts are juveniles that have fallen from nests and there are several excellent Internet resources.

An adult swift in your hand is a very unusual gift. As I held her I knew what a rare moment it was.
The female swift was much improved by midday and when a breeze came up she was able to take to the air with the help of our long sloped driveway. She caught an updraft and flew. I watched her circle over the neighbor's house and then head east. I can't think of a better Earth Day moment. I didn't have a camera to capture it, but it was definitely an Earth Minute I will cherish.
A swift is as different from a sparrow, as a cat is from a rabbit. The more you know about the wildlife in your area–bird, mammal or reptile–the greater assistance you can be to a fellow creature in trouble. Get to know the birds in your backyard.
Cornell University All About Birds website
Posted by Keri Dearborn at 3:18 PM No comments: This is the time of year when baby birds are about.

If a baby bird is found out of a nest many people panic and think the tiny creature is in need of rescue. STOP!

Most likely that baby bird has parents near by. This California towhee is still downy and is unable to fly, but its parents have purposefully moved it out of the nest. It is sitting in this spot just a foot off the ground because its parents led it to this safe location and told their chick to stay there. 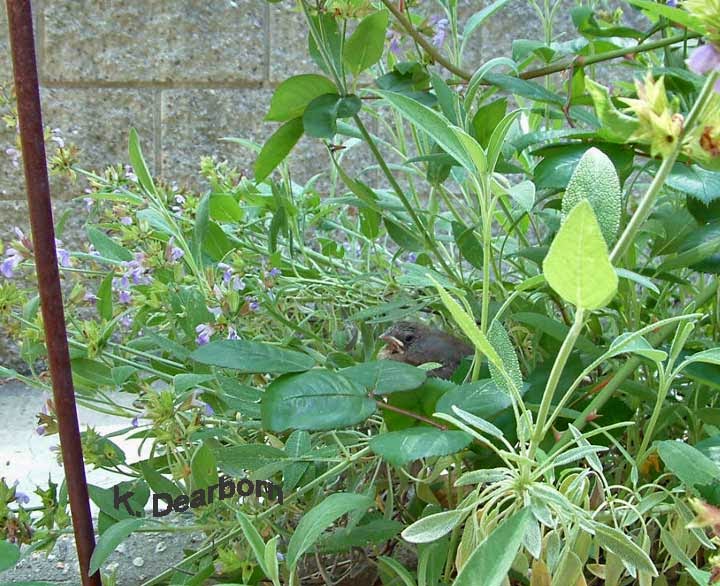 Some birds find greater survival rates for their chicks by encouraging them out of low lying nests and moving them to different locations in clumps of grass or low shrubs. This chick had two parents hunting for food only twenty feet away. 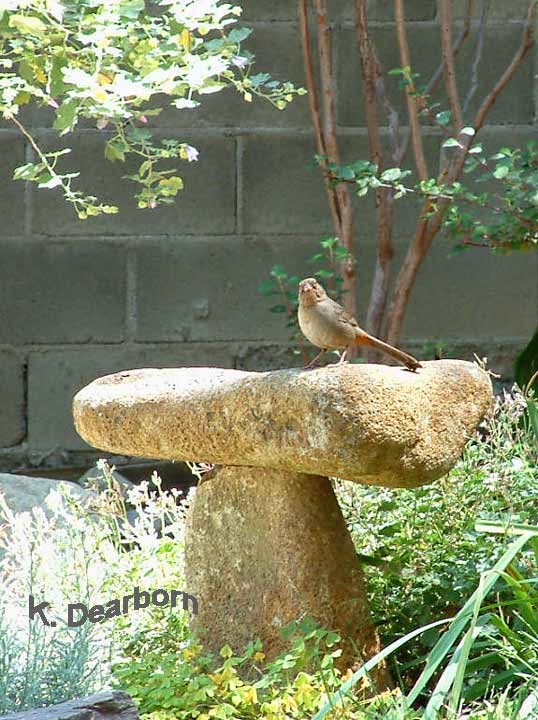 Occasionally, the parents were no where to be seen, but for the most part they were close by all day long.

When evening comes, the parents will probably move their two chicks again to a safe roosting spot for the night. A second chick was under our car port.

Birds are very good parents. Even in cases where predators have damaged nests and chicks have fallen out, parent birds will come back and feed their offspring. Handling a chick and putting it back in the nest will not scare off the parents. Hummingbird chick.

The best caregiver for a baby bird is its parents. They provide the right food and in some cases bacteria and enzymes necessary for digestion.

Baby birds need their parents. Watch from a distance and you will be amazed at the attention and care they give their chicks.

Hummingbird nests.
Posted by Keri Dearborn at 9:00 AM No comments: 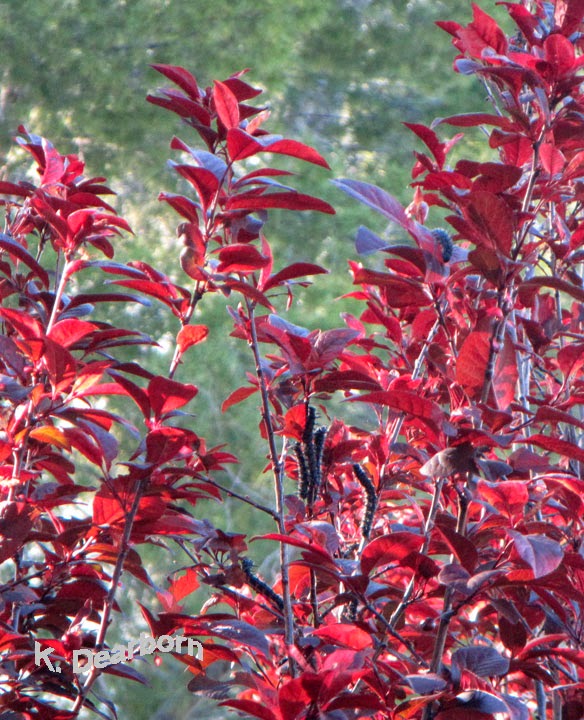 I first noticed them as a small mass of black threads high in the ornamental plum tree–black caterpillars about the thickness of a pen.

They were clumped together munching on the purple leaves. It has been a while since we have had mourning cloak caterpillars, but I recognized them immediately–bristly black caterpillars with spots of deep red. With all of the nesting birds gathering food for chicks, the caterpillars were fortunate not to be spotted in the top of the tree. 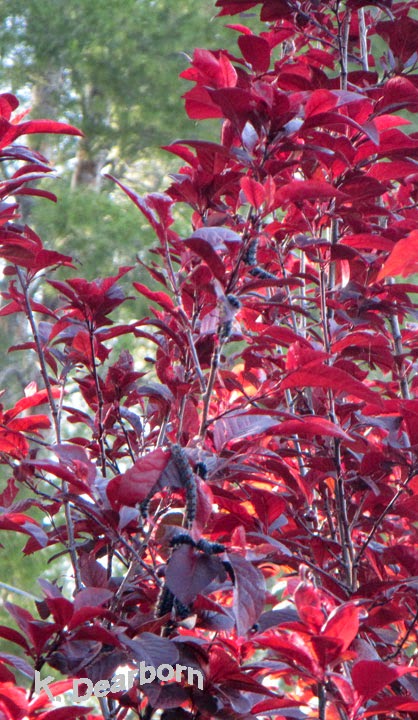 Mourning cloak butterflies are one of the few species, like monarchs that overwinter as adults. A tattered adult frequented the yard a few weeks ago. It must have been a female that laid eggs on the newly emerged plum leaves.

A few days later I saw them again, but the clump had become more dispersed and they seemed plumper.

On Sunday, I just happened to see one "wandering" up the front of the house. It had trekked down the tree, across the ground, across the walkway and started up the wall. Wandering is the phase of a caterpillar's life when it leaves the food resource it has matured on and goes in search of a quiet place to start its metamorphosis into a butterfly. The caterpillar didn't know how lucky it was, I also spotted an alligator lizard waiting at the trunk of the tree and feasting upon some of the caterpillar's less lucky siblings.

Monday, I watched a second caterpillar troop up the wall of the house. 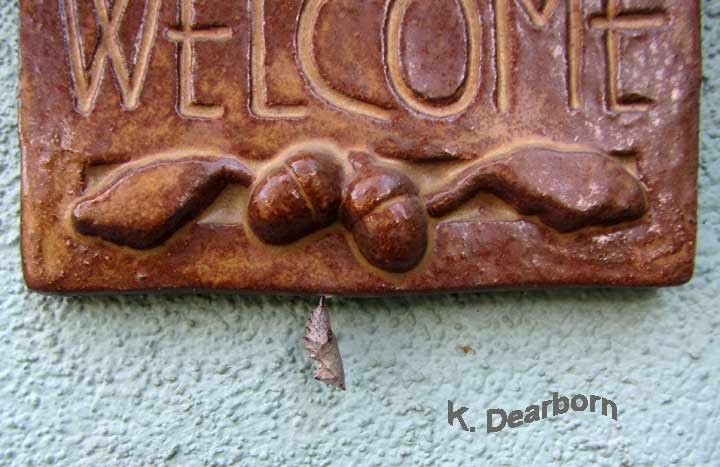 This individual attached itself to the bottom center of our "Welcome" sign. For about 24 hours it hung there, upside-down, in a "J" position. 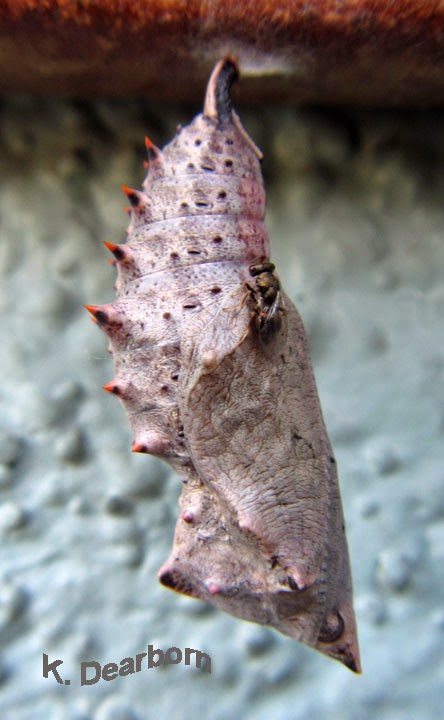 But yesterday afternoon I was lucky enough to catch the moment when it dropped its spiky black outer skin and became a chrysalis. For a few moments it twitched and shuddered, hanging from the tiny base of silk that attached it to the ceramic sign. Then it became very still.

In the next 10-14 days it should emerge as a butterfly. How exciting!

We planted nectar plants to attract butterflies and it seems to have worked. Hopefully, this is just the first of several butterflies species we will have this year.
Posted by Keri Dearborn at 3:50 PM No comments:

The Bewick’s wrens committed to building a nest in the cow skull on the back patio this spring. Both the male and female are in on this venture, but I can’t tell them apart. Listen for their communications as one works and the other makes suggestions or comments.

Once you watch this, you will never question that birds communicate specific things to each other.

The Bewick’s wren (Thryomanes bewickii) is a medium-sized wren found across the southwestern United States. They are believed to be monogamous. Typically their nest is built in a cavity, like a tree hollow, but they will use a nest house or even a ceramic pot.

The male is the primary nest builder with the female adding the finishing touches after she has approved the venture. She incubates the eggs, but he helps feed the offspring. Typically, it’s just a 14 day incubation and then just 14 days before the chicks leave the nest. The little ones are moderately feathered when their parents urge them out into the world. The little family tends to stay together for several weeks. The parents move the youngsters to various hollows and hidden areas and gradually teach them to hunt for insects.

Each week take a minute to find inspiration in the natural world. Take a one minute hike, a one minute adventure, escape for a minute of exploration. TheEarthMinute.com
Posted by Keri Dearborn at 10:49 PM No comments: