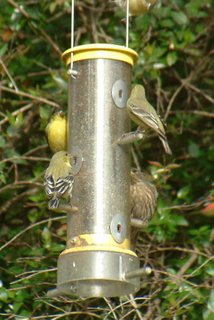 Today the thermometer climbed to 102 degrees F. in our shaded backyard. At a 9:00 PM it is still over 80 degrees F.

Only a week ago the temperature was a cool 65 degrees F. and it was raining. In drought challenged Southern California that should be a good thing. But to have almost an inch of rain at the end of May is odd. Usually our measurable rain falls between October and April. When change comes gradually it can be hard to see, but this year the small changes are becoming more noticeable if you take time to look.

In 2005 our autumn rain, never arrived. The native sycamore trees didn’t seed. When the flocks of lesser and American goldfinches arrived in January and February, the food they were looking for wasn’t available. People who have finch feeders in their backyards saw record numbers of goldfinches.

Quenching rains came in December and January, but unusually-warm February weather raised the temperature into the 80s for two weeks. Plants bloomed early, many of the local birds shifted into breeding mode.

Now, it is May 31st. The Allen’s hummingbird is close to hatching her second clutch of eggs. The California towhees, the black phoebes, the house finches and Northern mockingbirds have already fledged their first batch of offspring and are working on their second. The Bewick’s wrens are sitting on their third clutch.

In 2005 the house finches raised three separate families of offspring by late summer. Midway through August the population was exploding and avian pox ran rampant through the house finches and goldfinches. I even saw a spotted towhee with the telltale tumors of avian pox. The combination of disease and a dry fall, which made food less available, crashed the house finch numbers back to normal by December. But what will happen this year?

On a larger scale, we are seeing a huge increase in some species of migratory birds. For the past four years, in my yard, I have spotted one black-headed grosbeak, typically for a single day as it passes through in the spring. This year I had six individuals for over two weeks. I’d like to think my bachelor has found a girl and told a few friends how wonderful my yard is, but the reality is everyone I know who feeds birds has at least one black-headed grosbeak frequenting their feeder. Several have four or five, one woman has between 10-15 daily. Brilliant blue lazuli buntings are becoming frequent visitors at feeders, (though I must admit I haven’t had one). And there have been two confirmed sightings of Northern cardinals in the San Fernando Valley in the past two weeks. While it is exciting to see these birds, this obviously is not their usual migratory path. Where do they usually migrate to? Why aren’t they there? Has something changed in Central America or Mexico where they are coming from?

An hour ago, I caught sight of the hermit thrush. For seven years he has arrived in late October and migrated north in March. Last fall, he dropped in three weeks early. Now, it is nearly June and he is still here. Why? If he doesn’t travel north will he fail to find a mate and breed this year?

The hillside behind my house is dotted with native Catalina and holly cherry. Typically by late May these deep green shrubs are covered with dime-sized lime-colored fruit which will ripen to a dark red morsel by autumn. Only a few bushes have the peppercorn-sized beginnings of cherries. The fruit will ripen months later than the birds and other animals expect.

At a casual glance the Southern California hillsides are green, there are birds at the park and a swallowtail butterfly glides between the sycamore trees. But look closely, glance at a few notes you jotted down last year, or the year before, and there are small changes. How will all these small changes add up in the next few years? I don’t know. But change is an active force. Just as a snowball rolling downhill can suddenly become an avalanche, small changes may become massive before our eyes.
Posted by Keri Dearborn at 9:17 PM