A Family of California Quail

Let me start by saying, “We do not live in a rural area.” Our house is two short blocks from a major boulevard and one of the busiest highways in the country, the Ventura or 101 FreeWay. Topographically, our backyard nestles into a small canyon, but all of our fences are shared with other yards. Beyond the neighbors up the hill, streets and houses stretch out for a half mile before you reach the chaparral of the Santa Monica Mountains.

The other afternoon as we worked in the yard, we heard a bubbling birdcall. There, moving through the shrubs and trailing down the steps into the yard, was a family of California quail (Callipepla californica). Father, with his dark brown cap and dangling topknot, was in the lead. Behind him trailed four medium-sized chicks and mom.

While we watched with silent excitement, they explored beneath our young oak and sampled morsels between the toyon and holly cherry. Within minutes they located the scraps beneath the bird feeder and scratched at the ground searching for seed.

For three consecutive days the little family stopped in for a meal. One morning, as we watched, they demonstrated the difference in their survival skills and those of our other feeder birds.

A young California towhee swooped toward the feeder. A mourning dove mistook the diving towhee for a hawk. Doves, house finches and lesser goldfinches scattered.

They stood still as stones. Whatever position they had been in, they held for five minutes. Finally, when a house finch returned to the feeder above them, father quail turned his head and slowly the crew of six began moving again.

How and why have these quail wandered out of the hills? I hear they tend to explore in the late summer when raising their brood. Perhaps they were looking for food or water.

The other factor may be cats, or the lack there of. Eight years ago we had a cat that spent his days outside. Our neighbors had a cat. The woman four houses down had five cats. Today, neighborhood cats are kept indoors. The threat from coyotes has become too great. The unforeseen benefit has been that without cats prowling the neighborhood, quail have been able to reestablish themselves in the lower foothills and feel safe dining in our suburban backyard. 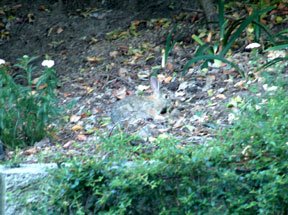 For ground-nesting birds and other small creatures removing an exotic predator, like the domestic cat, can make the difference between extinction and survival. Without the cats present, a cottontail rabbit freely hops along its evening rounds between a couple of neighbor houses. Alligator lizards prowl beneath our roses while fence lizards doze in the sun on the wall.

While the family only stayed a short while before heading back up into the hills, I’m hoping they will remember our oasis of native habitat. I love the notion of living in one of the world’s largest cities and having wild quail in my backyard.
Posted by Keri Dearborn at 1:58 PM

I love your blog. Check out my school blog at longwoodschoolgarden.blogspot.com