Birds and the Art of War

There is wisdom in an owl sitting motionless in a tree, wisdom and a lesson to be learned.

It was a seemingly quiet morning. A few mourning doves and house finches dabbled at the feeder. A band-tailed pigeon perched on the precarious tip of a slender cypress along a nearby driveway. Up the hill in the neighbor’s yard, a lone scrub jay called with urgency. 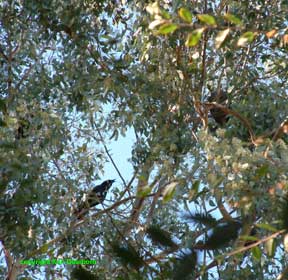 The jay’s alarm squawks became frantic, a second scrub jay joined in. Then a harsh “caw” took up the warning. Within minutes a single crow became a mob of 20.

High in the upper branches of a young eucalyptus tree perched a dark brown figure. Crows rushed the dark villain. Their sleek black bodies plunged toward the still figure but always maintained a safe six-foot distance. Other crows sat like glossy sentinels in adjoining trees cawing raspy threats. The air became a kaleidoscope of black wings and pointed beaks. 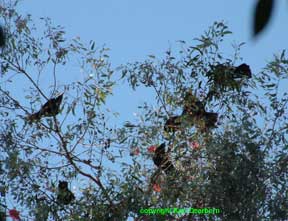 At first I thought one of the red-shouldered hawks was using the tree as a vantage point; frequently crows will mob a hawk and drive it off. But the shadowy bird in the tree didn’t move, didn’t give any ground.

The crows grew to a murder of 40. Black voices raked through the air.

This threat was personal, it was a great horned owl.

The great horned owl is one of the few creatures that poses a threat to crows. In the dark of night, this large bird of prey can steal a sleeping crow right off its perch. Identifying danger in their midst, the crows were determined to drive away the predator while the light of day still offered them protection.

And here is where the situation became more than just black birds squawking. Typically, scrub jays do not share space with crows by choice. Crows, after all, are known to take the hatchlings of smaller birds as food for their own youngsters. Similarly, crows and ravens compete for territory. I have watched the local family of 15 - 20 crows mob the pair of ravens that have been checking out real estate in our neighborhood. Jays, crows and ravens are all intelligent birds and they prefer to keep their distance from the competition.

But in the owl, these birds had a common foe. The pair of scrub jays did not have the size or number to drive off the great horned owl. The jays not only attracted the attention of the crows, they continued to work alongside the crows aiding in the harassing cacophony. The crows sent for reinforcements, extended family members arrived, expanding their usual number well beyond 40. If the mob could press the owl out of the tree and into the air, they could drive it off, chase it out of their territory.

After an hour of constant effort, most of the crows moved on. But the owl was not forgotten, four stouthearted defenders perched in the tree encircling the threat. Throughout the day, crows arrived to take their turn at the watch.

The owl moved closer to the tree trunk, its tawny feet with dagger-like talons gripping the smooth gum bark. 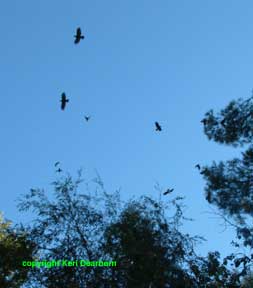 By 3:00 PM the day was slipping away. The approaching night brought renewed urgency. The black mass returned and they brought with them the calvary, ravens. Bigger and bolder, one raven flew right into the treetop. With menace it croaked and waved its pointed beak within a foot of the owl. Several times it rushed the quiet predator, while crows raucously filled the air. Still, the owl did not move.

Here it was, two forces in direct opposition. Each side knew themselves and their abilities. The jays, crows and ravens looked danger in the face and declared its presence. They put aside their conflicts of similarity and banded together against a shared threat. The crows had the strength of numbers. If they could maintain their harassment of the enemy, they might be able to unsettle the owl, press it to make a mistake and take to the air. On the wing in daylight, the owl would be playing by the crows’ rules, they might gain the upper hand.

But the owl knew the best strategy for a lone predator was patience. Its back was safely against the tree trunk. Its sharp talons and beak posed a great enough threat to keep even the large raven at bay. If the owl could maintain its position, it was safe. The harassment and threats never ruffled its soft brown feathers.

On this day the owl prevailed, it stayed on its eucalyptus perch until evening drove the crows to roost.

Know your enemy and know yourself. Fight your battle, not your opponents. Study the travails of others, bird or human, strategy is strategy.
Posted by Keri Dearborn at 6:51 PM