The Gift of Trapdoor Spiders

Not every spider builds an aerial masterpiece like Charlotte in “Charlotte’s Web.” Many spiders stay close to the ground and some, like tarantulas and trapdoor spiders, live underground. 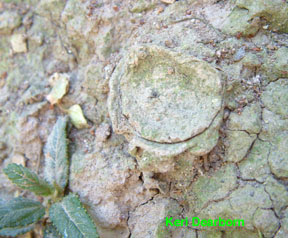 Trapdoor spiders are found worldwide, from Africa, Australia, and China, to North and South America. On our hillside in Los Angeles, we are fortunate to have a colony of California trapdoor spiders (Bothriocyrtum califonicum) a native Pacific Coast species. The heavy adobe soil poses a gardening challenge, but creates prime real estate for burrowing spiders. The native clay is structurally strong, while the hillside slope allows rapid runoff of water. This combination has prevented humans from planting exotic landscaping, which in turn has allowed these trapdoor spiders to thrive.

This photo shows the first trapdoor home I discovered in our yard. Though the spider camouflages its door with dirt and debris, the large size of this protective door allowed me to spot the distinctive “D”-shaped covering. 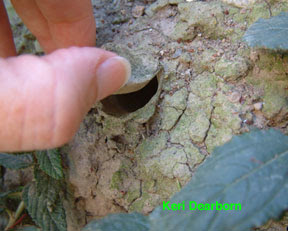 The back edge of the “D” creates the web-constructed hinge, which allows the spider to open it’s door when it detects prey on its doorstep. The spider lifts up the door, grabs the cricket, spider or other unwary arthropod, and pulls in down into its tunnel. Layers of webbing make the eight-inch deep tunnel a cozy home for the California trapdoor spider. From inside, the trapdoor spider can hold the door tightly closed. The precision of the door’s closure makes it almost impossible to open without damaging the door. This was the first time I was able to open this door. Unfortunately, it was because the large adult female spider must have passed away. Female trapdoor spiders are believed to live up to 12 years. I have known this spider to reside in this large tunnel for 13 years.

Trapdoor females are homebodies, preferring to spend their lives in one location. Males may wander past her door, but the female spends her life quietly underground. She is also a good mother, raising her spiderlings in her web-lined tunnel. She protects them and provides them with food for a year until they are large enough to strike out on their own. 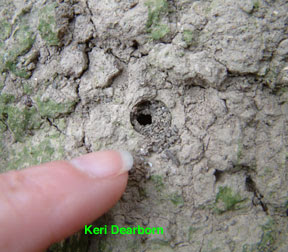 All around the hillside matriarch there are tunnels and doors of younger trapdoor spiders. Some are eaten by other predators and their tiny doors have broken off to reveal the narrow tunnel without an owner.

Others are approaching the size of their mother’s tunnel. 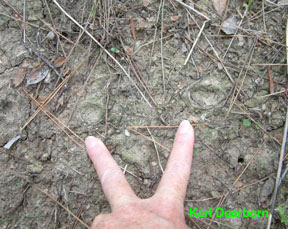 Spiders are ancient creatures. The fossil record shows evidence of spiders 350 million years ago, long before dinosaurs or the first mammals. How long has this colony of trapdoor spiders lived on this hillside? Probably, long before humans lived in this valley. 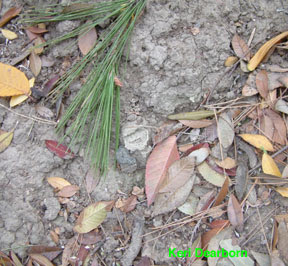 The experts don’t believe the shy and secretive trapdoor spider lives in the built-up city of Los Angeles anymore. But in little fragments of native habitat, these ancient creatures survive. I am in awe of this colony of spiders. I am careful not to plant too many plants on the bare earth they prefer. I knock on human neighbor’s doors when their overwatering threatens to flood the spiders. I try to preserve their plot of hillside so their colony can continue on long after I am gone. 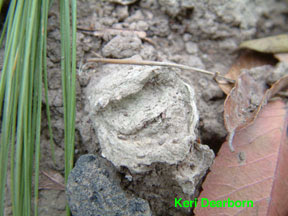 Native wildlife is a treasure, a gift. Big or small, plant or animal, this year make it your mission to preserve and protect.

For great PICTURES of trapdoor spiders, including a mother with her young, visit

Okay, I have two questions: first, how does the female know a male of her species is passing by and thus doesn't pounce out to eat him? Or do I assume incorrectly?

Second, what do your neighbors say when you ask them to not water so much: "Why not?" "Well, because it's flooding out my trapdoor spiders."

Bothriocyrtum californicum, AKA the "California Trapdoor spider" is able to mate due to a number of reasons. Like many Mygalomorphs (tarnatulas, funnel webs, purse spiders, etc) they communicate through pheromones, and ground vibrations. Males can sense a female's burrow and will then do a kind of "drumming" on the outside of the burrow to let her know he's there, and that he's not food. The rest is nature's perfection.

Thank you for the pictures and great information!! We recently moved to Baja Mexico and started to find numerous 3 inch long trap door spider homes on a plowed field near a friends house- today my kids found an intact nest and are excited learning more about them-- Thank you for being a part of our homeschooling adventure today!!

I've had a Trap Door Spider colony in my back yard for the past 10 years (northeast L.A.) since I bought this house. Just recently on the day before Thanksgiving (2008) after a good rain we found one in our house walking across the floor. It's a male and most likely was on the hunt looking for a female (November). At night you can open their door and most likely they will be at the entrance waiting for prey...good stuff!

I am TERRIFIED!!! Of Spiders! After that heavy thanbksgiving rain, out of all the people, I had to see on of them creeping across the street. I didnt believe my eyes. I first thought it was a black widow but then somehow knew it wasnt so i finally tried to find the name of that spider and came across this blog... I am amazed how you talk so loving ly about this ugly ugly insect like its a dog or a cat or a pet. Amazed. I wish I wasnt terrified of spiders, it would make my living in Mt.Washington so much easier. thank god I can just about deal with the daddy longleggies. But to find a trapdoor spider or widow or anything bigger and more fat spider in my house, I will have to kill it. There are tons of ants you stomp while walking, millions of flies you kill when u drive your car... why should the spider be spared? I loved Shane's comment with how does the neighbor respond! Hilarious! If spiders have been around for 350 million years.. Im sure they will survive some housebuilding Angelenos!

Keri - I saw one on the wall of my apartment complex in Glassell Park this morning! I took several photos so I could look it up later since I didn't know what kind of spider it was. Interesting blog, and just wanted to let you know they're in Glassell, too.

I love spiders. I find them helpful with other insects. I live in Santee and have seen for sometime now spiders that I thought were tarantulas. I only see them after a good rain. I now know what they really are. Thanks for the info. I hope we have many near our home. I will becareful about watering our yard and hillside.:)Thanks

We just ran across one of these in our highland park apartment after the rains this weekend. Fascinating animal, but pretty scary to run across on the shower curtains first thing in the morning. I put it outside to burrow a new hole for itself on the clay hillside next to our walkway. Seems like there are a lot of these things around the LA area, neat.

I live on Salt Spring Island in British Columbia and found what looks like one of these Trap Door spiders. It was around two inches across. My only question is how poisonous are they to humans?

They are not poisonous.

Planning to present a beautifully packed gift to someone close to you on any special occasion,
but don’t have any idea of gift selection? check from
giftbasket, gift baskets, online gift shop Australia, gift hampers, gifts, presents