Zone 1 is the Realm of Spiders! I’ve tabulated and entered the data collected counting plants and animals in Zone 1 for the Backyard Biodiversity Project. 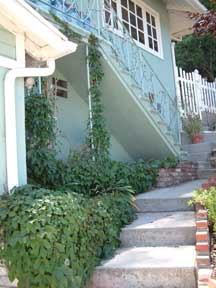 The area consists of the cement walkway with steps to the front door, the wall, the eaves and the planter under the stairs. As you can see, there is minimal habitat.

I have collected data on this Zone three other times, October 2001 and January of 2004 and 2005. I couldn’t understand why it was taking me so much longer this time around, but there was a good reason.

Previously the highest species count was 19 different plants and animals.

This time, I found 63 species living in Zone 1 or traveling through it. There are 47 different animal species and 16 plant species.

I think the major difference with the species count comes from the fact that it is summer. During January counts I only saw 4 species of spider, but in June there are 2 species of mites and 14 different spider species.

They range in size from adult corner spiders (Hololena curta) about the size of a quarter to a tiny delicate spider only a millimeter in size that is gray in color and sways like a dancer on the filaments of its web. Young wolf spiders roam the stairway while 7 juvenile black widows (Latrodectus mactans) are trying to grow up unnoticed at the corner of a step or in between bricks. Though they are feared by many people, the odds are against any of these youngsters making it to adulthood. Most likely, they will become food for someone else.

Seven cobweb spiders (Pholcus phalangiodes) stake out the high overhangs while another exotic, a sow bug killer spider (Dysdera croctoa) hides under a brick in the planter waiting for one of the common pill bugs (Armadillidium vulare). The pill bugs have increased in number, so it is fine with me if this girl hunts the planter. 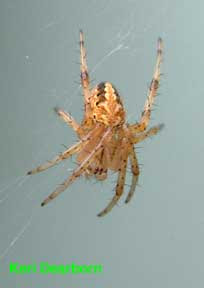 There is a house spider (Achaearanea tepidariurm) on the stairs. A predatory red mite dashes across my data sheet. And if I count early in the morning, I see this young common orb weaver (Neoscona oxacensis), before she roles up her web from the previous night and retreats to the Boston ivy for the day. Currently, she’s only about 5 mm, but come the end of summer she will be a plump beauty snaring insects in her web each night.

A mourning dove, an alligator lizard, a desert cottontail and a striped skunk occasionally pass through this small Zone. The dove and the lizard bask in the sun, the cottontail uses the steps, while the skunk seems to be dining on the occasional brown garden snail.

Since I removed some of the nonnative plants and have reduced the water in this area, the exotic brown garden snails and the Argentine ants have decreased. In fact I haven’t seen an Argentine ant in this Zone since 2004. 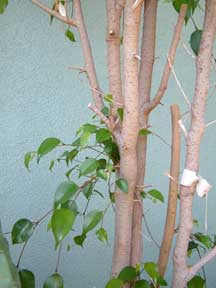 The weeping fig (Ficus benjamina) is a perfect example of an exotic species severely damaged by this year’s winter frost. While it is slowly recovering, native plants weathered the frost and are a better option. To help Zone 1 provide more habitat, I plan is to add more native plants and create a small rock pile that will offer shelter to slender salamanders and alligator lizards.