I know why the hummingbird in the front, “F,” has babies that seem so far behind in development. (see Hard-Working Single Mom's). The branch she has built her nest on is at the top of the plum tree and just the slightest breeze can make it bend dramatically. I believe her first brood tumbled out of the nest , at only a few days old, in one of our March storms. She must have immediately laid two more eggs.

I came to this conclusion after watching her try to keep her two new chicks in the nest during a few windy days. Her chicks were about 8 days from flying, too big to sit on, but there she was trying to sit on the smaller of the two. All through the day she hunkered down on the edge of the nest trying to help the chicks ride out tossing wind gusts. With each moment of calm she would dash off to find food. Sometimes, while she was gone, a gust of wind would carry the chicks to a near vertical position.

The next morning one of the chicks was gone. Sometime during the night, it had disappeared. We looked through the planter beneath the tree but could find nothing.

For the last few days, I have checked the lone chick daily. The weather has been cool, but the winds have abated. “F” stays close to her nest . She and I are counting the days until her precious chick can fly.

Then yesterday afternoon I came home and as I walked up the front steps I glanced up at the nest. It was torn apart and hanging in three pieces. What had happened? 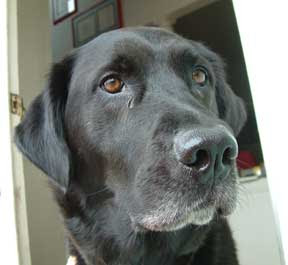 I looked around under the tree. “F” appeared. The Allen’s hummingbird was frantic. I have come to know the rapid peeping sound these females make when they are distraught. (Predators and hummingbirds). This little bird had worked so hard to be a mother.

Inali, our 5 year-old black lab / golden retriever mix, was out front too. She frequently birds with me. She grew up following 4 chickens around and has an affinity for birds. Inali started sniffing the ground beneath the tree. There it was a tell tale sign–a large dropping from a good-sized bird. The nest had probably been raided by a crow, jay or even the raven.

I kept telling “F” how sorry I was. But Inali kept sniffing. She froze and stared into the twisted undergrowth of African daisies. She kept staring. I followed her gaze, and there, deep withing the tangle of rambling stems, sat the tiny hummingbird baby. Somehow, as the nest was torn apart it had tumbled out, landed unharmed, and now clung to a twig with tiny feet.

We had to save this baby. My mind raced. Could I feed it and keep it alive for the next few days as it got all of its feathers and learned to fly? Probably, but if I could get it back up in the tree, maybe “F” would finish the job she had set out to do. Only she could encourage the baby to leap into hovering flight. Only she could take it to the best places to find food in the neighborhood.

I had to get this little one back up into some kind of nest in the tree. I carefully scooped it up in my hands and took it into the house. I tossed a towel in the fruit bowl and placed the chick there. A nest. How to make a nest?

I grabbed a small plastic cup that had held take-out salsa, cut it down, gathered dog hair and nesting wool to make a cozy inside and then taped it securely in the tree. I chose a lower branch, closer to the trunk. No more worrying about the wind. Then I set the baby in the manmade nest and told it to call for its mother. Everything happened in less than 10 minutes.

Inali and I retired to the house and watched from the window. We could hear thin squeaky chirps. “F” called for her baby. She checked high in the tree. She searched the ground near where it had been. She stopped. She called. There was an answer. Then I watched her triangulate, getting closer and closer, until she found the little one. My nest didn’t offer a convenient place for her to sit and feed her tired and frightened offspring, so “F” walked sideways down a twig and then turned over her shoulder to feed the hungry chick. Mother and baby were reunited. 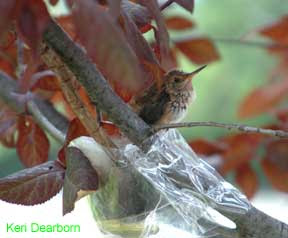 Inali and I sat on the porch watching “F” chase off other hummingbirds and then returning to feed her chick. Then “F” came over to us and hovered a few feet away looking right at us. I could feel her gratitude. Together the three of us had saved her baby.

The chick doesn’t really like my nest. It prefers sitting on the edge. Last night was going to dip into the low 40s. Afraid that it would be too cold without the comfort of a real nest, especially after its traumatic day, I scooped it up last night after dark. It slept soundly in a plastic container cushioned with paper towels. At 5:20 AM, before the sun came up, I put it back in the makeshift nest. “F” is feeding it again this morning. The baby is stretching its wings and fluttering. 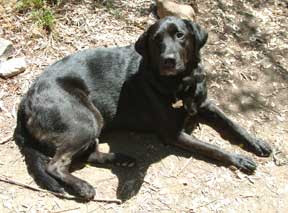 This baby hummingbird has three mothers–its natural mother, me and a big black dog that saved its life.

That's a great story...so cool that Inali found the baby. I haven't seen one single hummingbird at our feeder since we put it up a few months ago. And, now that we have the new porch & no crevices the other birds keep trying to find a place to nest. They are stuffing straw on the electrical box which is way to narrow. Yesterday I went and bought a little bird house & hung it nearby, but not sure if it is what they want?!
It was so cool that M. spotted the egret (I think that was it) perched on the high pole down the street when he was here.
I just saw the cutest photo of a chubby blue bird from a woman's blog in Oregon - a pic taken in her backyard...she labeled it "towhee" but now I see your Calif towhee - is that the same, I wonder? Are there different ones in Oregon?
tammy

There are several species of towhee, but I don't think any of them are blue. At least not in North America. Good luck with your bird house.