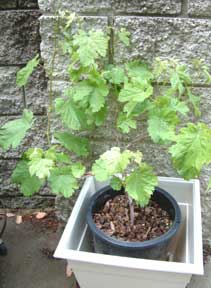 Have you ever moved a pot on your damp California patio and seen quarter-inch-long critters hopping away? They look something like shrimp, but propel themselves on hopping legs–sort of like a flea.

For years we've seen these tiny creatures and wondered: What are they? 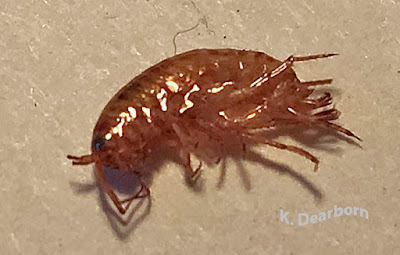 It just happens that new findings on island fox diet on the Channel Islands is showing that island foxes are eating small hopping crustaceans on the beach called "beach hoppers." These little guys are the critters erroneously labeled "sand fleas." Beach hoppers are decomposers. They live in burrows in the sand and eat kelp washed up on the beach. Find out more about island foxes at islandfox.org.

I wondered if the crustaceans in my backyard were related to these beach hoppers.

They are, but it turns out they are exotic relations. They are known as "lawn shrimp"–kind of a fun name. Arcitalitrus sylvaticus is in the same family as the native beach hoppers that we see on CA beaches, but the lawn shrimp is native to southern Australia.

It is believed these Australian crustaceans arrived in California in the early 1900s in the damp soil surrounding blue gum eucalyptus that were being imported and planted as wind breaks on ranches and agricultural land. While most of those large old eucalyptus trees are gone, their descendants and the lawn shrimp are still with us.

As decomposers, lawn shrimp contribute to the breakdown of organic matter into the soil. They are not known to have a negative ecological impact. In fact, some birds may eat them. 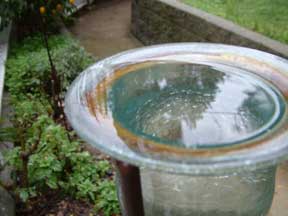 Despite being crustaceans, these little gals drown in water. When moisture levels fluctuate, the lawn shrimp move from soggy soil to sidewalks, where they escape drowning but may become dehydrated and die. When it is dry, they may end up in pools or water dishes and drown.

While they may come into buildings to escape too much rain, they pose no threat to people or pets. They perish quickly in dry areas and turn red when they die. That's when they really look like "shrimp."

Other creatures displaced by rain:

Posted by Keri Dearborn at 6:05 PM