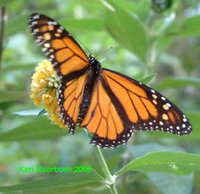 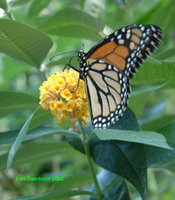 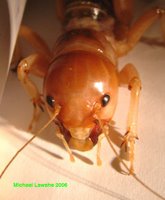 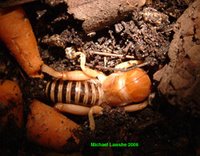 Both the monarch and the Jerusalem cricket are adapted perfectly for the lives they lead, I can’t think of a better definition of beauty.
Posted by Keri Dearborn at 10:53 AM No comments:

Effects of the Day Fire

Is a wild fire 50 miles away really effecting the birds in my backyard? Yes.

The “Day Fire,” which began on Labor Day and grew to be one of the largest wildfires in Southern California history, continues to smolder. Over 200,000 acres have burned, much of it in the Los Padres National Forest. NASA photo from space.

Sunday, another white-crowned sparrow arrived. After gobbling down some food, the tiny wanderer hopped into the bird bath and scrubbed. When it was done, a scum of ash floated on the water. 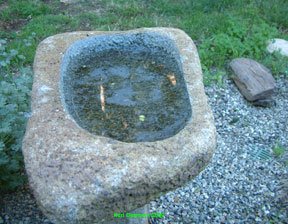 The white-crowned sparrows, migrating south, seem to be traveling through the ash cloud and/or the charred hillsides of the Day Fire. Perhaps that is why we are seeing individuals and not the family groups that typically arrive together. The fire has added to the rigors of their migration.

Fire greatly alters the terrain. Roads and access to much of Los Padres National Forest remain restricted because of continuing fire danger and possible landslides. Even before the rains arrive, landslides threaten water drainage and habitat for invertebrates, amphibians and fish.

Few structures were consumed in the “Day Fire” due to the tireless efforts of firefighters, but the home range of many plants and the foraging area of countless animals have been greatly altered.

Interestingly, the arriving warblers, a Townsend’s and numerous yellow-rumped, are clean. They must be traveling a different route, possibly along the coast.

What a challenge it must be for a small migratory bird to travel countless miles with hopes of stopping in the wilderness of Los Padres Forest, only to find the streams are clouded with dirt and ash, the plants and insects are gone, and the oasis they planned on is a charred landscape. How many perish unable to continue their journey?

The juncos and the hermit thrush have yet to arrive. I can’t help but wonder if the fire will have an effect on them?
Posted by Keri Dearborn at 12:51 PM No comments:

Perhaps people in Southern California overlook the changing seasons because we have surrounded ourselves with plants and animals from other environments that don’t reflect California's natural landscape. Reintroducing native plants to our hillside has magnified our appreciation of the changing seasons. 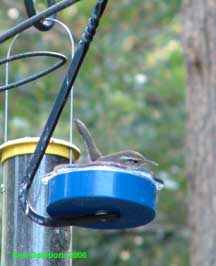 This afternoon I had a distinctly California-autumn moment. As I stood on the path, a Bewick’s wren hopped up from the ground to snatch dried fruit from between the carmel-brown leaves of a native ribes (wild current). The tiny dried currents were few, but they were the food of choice for the diminutive wren. Dried leaves crunched ever so slightly beneath the bird’s light steps.

Finding only a few morsels, the Bewick’s wren then flew up into a feeder dish to check out what I had made available. 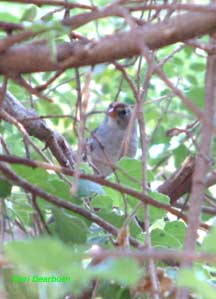 Friday morning, Oct. 6, the white-crowned sparrows returned for the winter. An adult and a juvenile have been sitting high in the lavatera. In the mornings the adult calls loudly.

These seasonal visitors are about a week late. Last year they arrived on September 22 and in 2004 they appeared on September 30. Usually, a small family shows up together. I can’t help but wonder it their delay is related to the appearance of only two birds. Did something happen to the white-crown’s mate? Was there more than one offspring? Will we see the rest of the family appear in the next few days?

It must be time to travel south, because a female black-headed grosbeak stopped in on Saturday. She ate, rested all day in the tree mallow, ate some more, and then continued on her journey. Now I’m keeping an eye out for our other winter residents, the dark-eyed juncos and the hermit thrush.

The desert tortoises have found their favorite winter burrows and are close to settling in for a long sleep.

The male red-shouldered hawk has returned to roost each night in the pine trees. Apparently his fathering duties are over for the year. The Cooper’s hawk however is not happy about the potential competition. This afternoon it tried to chase off the larger hawk.

Autumn is a season of change. Perhaps that is why it is my favorite time of year. Each morning has a crisp edge of possibility.

Early this AM autumn offered a surprise. Coyotes frequent our neighborhood most of the year, but this morning we had a new predator in between our suburban homes. Around 4 AM the dog ran outside to bark. In the middle of the street stood a reasonably-sized bobcat.

It could be a lack of available wild water or the abundance of small prey milling around suburban homes. My hope is that some wild creatures are adapting to survive in a world choked with humans. The wild is adapting to us, can we adapt to them? Can we put aside having to be the dominant creature and find a way to just be good neighbors?

I’m going to plant more wild current and scatter some native grass seed. What are you going to do to be a good neighbor?
Posted by Keri Dearborn at 3:32 PM No comments: