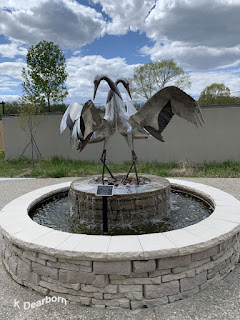 Posted by Keri Dearborn at 8:14 PM No comments:

A week ago the ironbark tree across the street burst into bloom. It was one of the few ironbark or eucalyptus trees in the neighborhood that was doing well. Most have been severely impacted by CA's continuing drought.

The blooming tree was an oasis for migrating birds - Hutton's vireo, Anna's hummingbirds, yellow-rumped warblers, Townsend's warbler, a black-throated gray warbler, and ruby-crowned kinglets. All of these species were documented in a single morning last week. The resident Allen's hummingbirds were also imbibing of the flower nectar. This single tree was providing natural food and sanctuary. 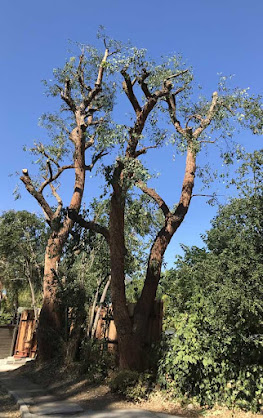 This morning the ironbark and its neighboring red gum eucalyptus are savagely reduced to skeletons. The red gum has been poorly trimmed before. Because of it, its shortened limbs have been forced to send out new growth that is unstable and tends to break off in winds. To reduce the dropped limbs the home owner made the same mistake again, repeating a cycle of mismanaged trimming that will cause this tree to regrow fragile limbs and result in shortening its life. Each chopped off limb is now open to insect and fungal invaders. It is a cycle I have witnessed throughout my neighborhood for twenty-five years.

Twenty-five years ago our neighborhood was renowned for its tree-lined streets. We were typically cooler than other neighborhoods. Today 90% of our large trees are gone and Woodland Hills frequently records the hottest temperatures in the west San Fernando Valley. 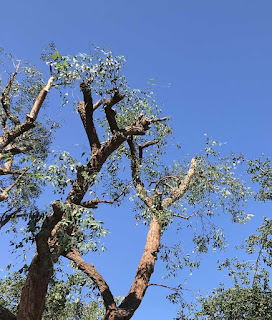 In the remnant of a single blooming branch a small Hutton's vireo sat bewildered. (circled in green) 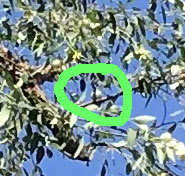 How do we stop deforesting our urban forest? How do we teach people the value of their trees and the shade they provide? What steps can we take to plant trees that both provide habitat for native wildlife and are compatible with urban needs?

Who speaks for the urban forest?

Posted by Keri Dearborn at 1:01 PM No comments: