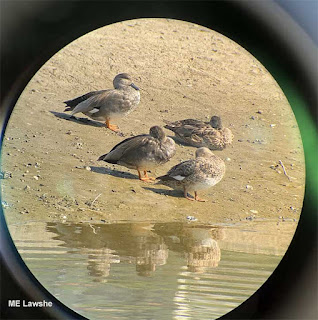 One nice thing about a spotting scope: it isolates your focus down to one or a couple of individual birds. If it's on a tripod, you can hold a birding book in one hand, while you look for distinguishing characteristics.

At a glance, what stands out:

It doesn't seem like a lot, but it is. Additional important info is the location and the time of year.

Malibu Lagoon on the Southern California coast in February.

A quick paging through ducks in my Sibley Guide to Birds finds just a few typical western ducks with bright yellow orange legs:

While everything isn't perfect, it's pretty clear that the ducks we're looking at are two pairs of gadwalls. The males have yet to completely don their breeding plumage, but they aren't mallards or shovelers.

Don't be afraid to try and identify the birds you see. Note the visual or behavioral characteristics that stand out. Those bright yellow-orange legs or a white wing patch can be the key to ruling out other species. 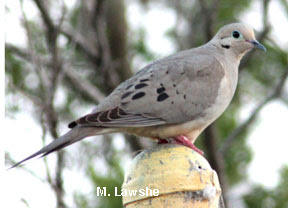 A California Towhee and Its Call

What kind of Junco

What's that Bird on the Ground

Posted by Keri Dearborn at 6:48 PM No comments: