A black bird lands on your backyard fountain. Is it a raven or a crow?

There are a couple of physical traits I look for to help me make the identification:

Size - Is the sitting bird generally the size of an 8"x11" piece of paper from its feet to the top of its head? Or is it smaller? Ravens are big birds. Crows are medium-sized birds. But size can be tricky without something to use for comparison.

Wing to Tail - When perched, a raven's folded long wings will reach nearly to the tip of its tail. A crow's wings are shorter, proportionately, so the tail appears longer. In the photo above, the bird's wing tips almost reach to the tail. Hmm

Beak - Both crows and raven have feathering onto the upper edge of their beak. The beak of a raven however is large and thick. Its also longer than the head. A crow's beak is long, but not longer than the depth of the head. 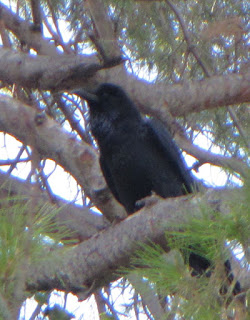 Throat - Ravens have shaggy looking feathers under their throats. They can fluff up their throat feathers. They also can hold those feather smooth to the body. The raven, pictured at right, has its throat feathering fluffed up while calling to a mate. 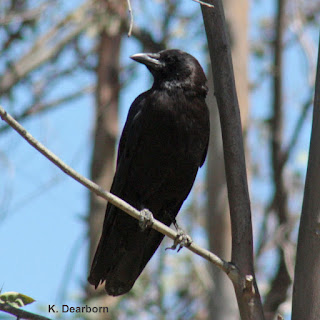 Crows also have a greater tendency to flick their tail and wings while sitting. (Notice how the crow's beak is as long as the head is wide.)

So the question remains. Is the bird on the fountain a raven or a crow? It's a raven.

There are differences when these birds are in the air, too. More on that later.

To really get an understanding of the size, see a blue bird on the same fountain.

Posted by Keri Dearborn at 5:14 PM