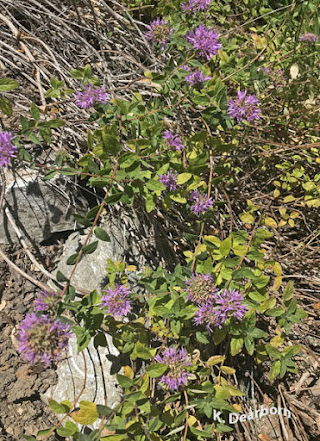 Gardening with native plants can be a challenge. Natives don't always thrive in the site you assign them. For example, the sedge below is growing, but it isn't thriving. Right beside it, the coyote mint (Monardella villosa) pictured above is thriving. 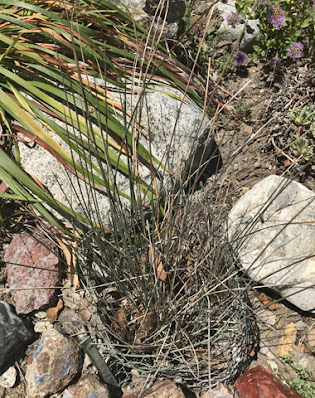 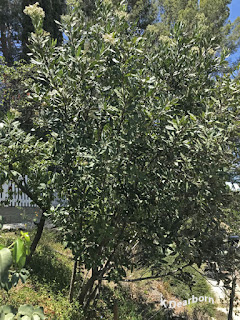 This toyon grew from seed on its own and is the most robust toyon in our garden.

I noticed the lacy-leaved plant, below, coming up last winter and I let it grow, because I wasn't quite sure what it was. It was sprouting from the dirt of a nursery raised native that had petered out.

It got bigger and bigger. I've tried to let go of the term"weed," sometimes native plants come and they grow where they're suited, not where we want them. It looked too pretty to be a weed, but what was it? 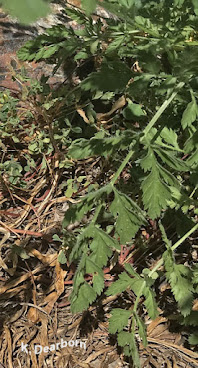 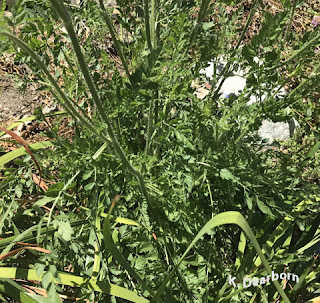 It reminded me of a plant I had seen in wild meadows, commonly called: Queen Anne's Lace. 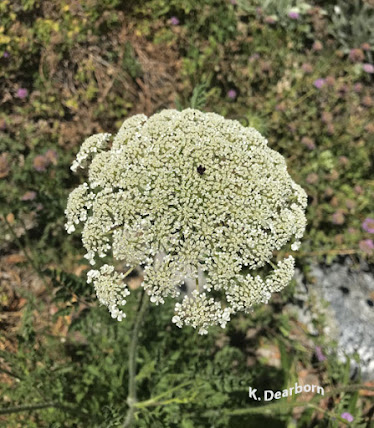 With a little investigation, however, I discovered wild carrot is an introduced plant from Eurasia. It is indeed the ancestor of domestic carrots and most likely came with early European immigrants to North America. The USDA Plant Database map reveals that it is found throughout the North East to the Mississippi Valley, expanding into the South, and all along the West Coast of the U.S. Some sources site it as growing in all fifty states. In some states, according to the Invasive Plant Atlas of the United States, it is considered an aggressive invasive. Like the carrot in your refrigerator, it has a thick taproot, difficult to pull out.

Some states villainize it and make it illegal to transport or sell the seeds. At the same time researchers are investigating the possible health benefits of its volatile oil. Wild carrot has long been considered a medicinal herb with diuretic properties. 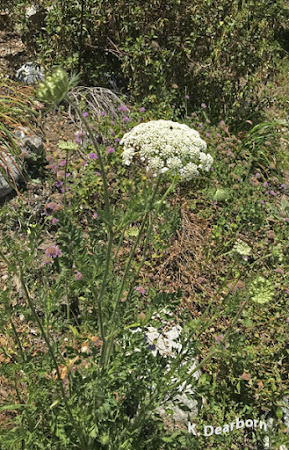 Where did this lovely specimen in my yard come from? I have no idea. Most likely, birds transported the seed, which have tiny burs on their edges. Birds occasionally bring black nightshade into the yard. Or maybe it was in the soil that came with that nursery plant.

Will I remove it? The biggest claim against it is that it takes hold in disturbed soils and out competes native plants or grasses grown for livestock. It can be mildly toxic to livestock, in other words: this plant has evolved to protect itself from grazing animals. Because of its deep root, it holds unstable ground, but after several years all sources say that it gives way to the natives. Controlled burning doesn't reduce it, because it grows back from the deeply established root.

Right now it is beautiful and somewhat contained. I think I'll leave it. We'll pick the flowers and not let it go to seed.

Posted by Keri Dearborn at 1:38 PM No comments: 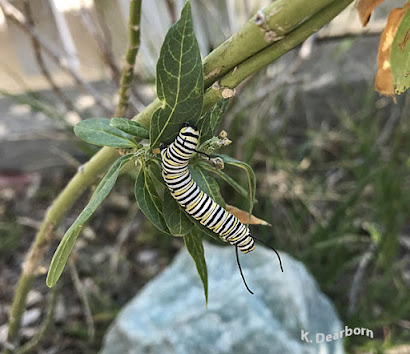 What a surprise this morning, monarch caterpillars! And they are an inch and a half long.

We've been seeing an adult monarch butterfly (Danaus plexippus) a couple of times a week. The last few years we have been growing native narrow-leaved milkweed (Asclepias fascicularis) and the introduced tropical species (Asclepias curassavica) that is readily available at garden stores.

We've had little caterpillars in the past, but they seemed to get eaten by either a bird or a predatory insect. This is the first time that we have had caterpillars reach this size in years.

The group of monarch butterflies that live in California (west of the Rocky Mountains) do not migrate to Mexico with the main population from the southern Central and Eastern part of the U.S. This Pacific population overwinters along the coast in Southern California down into Baja. 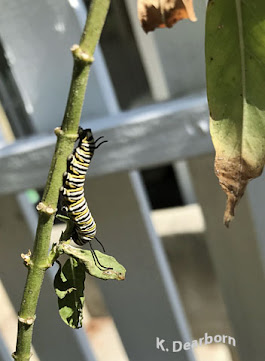 Loss of milkweed habitat has caused declines in this population. Most butterfly species lay eggs on a specific plant species and their caterpillars are dependent on that plant for food. Native milkweed can be a challenge to grow. I didn't realize that narrow-leaved milkweed dies back each winter. I thought I had killed it and took it out. Now I understand that it will grow back in the spring. Until my native milkweed is established, I supplement with the tropical species in a planter, to avoid it becoming invasive.

These hot days, with temperatures above 100 degrees are a challenge for plants and wildlife. I hope that our caterpillars make it to chrysalis. It would be great to contribute to a new generation of monarch butterflies.

Other caterpillars you might see in your CA yard

Posted by Keri Dearborn at 12:56 PM No comments: