What To Do With a Baby Bird

Baby birds, we see them out of the nest, shudder at their vulnerability and immediately think they need our help. But STOP!

Before you do anything with that baby bird, stand back, watch and listen.

There is a baby bird, all fluff and down, in some tall grass in my backyard right now. It doesn't have flight feathers and its little legs are wobbly. But this little bird did not fall out of a nest. It's parents pushed it.

California towhees are ground-feeding birds. They like their chicks up and on the move ASAP. Amid a flutter of brown wings and successive chirps, I watched this morning as the pair of California towhees were leading this tiny youngster out of the chaparral and into our yard. 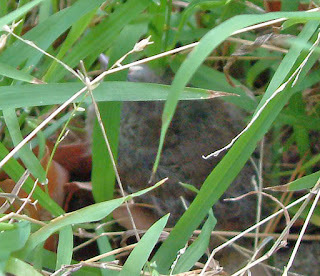 The towhees however are having a stressful day. Without the protection of the nest, their chick is vulnerable and they are working together to protect it. When a Bewick's wren and an Allen's hummingbird both stopped to glance at the youngster, the towhee pair tolerated their presence. But when a fox squirrel was passing too close, the towhees acted as a team to drive the squirrel off. They chased that rodent completely out of the yard.

I've looked a few times to make sure that the tiny chick is OK. At first glance it appears to be a lone, distressed nestling on the ground. But the parents are close-by. If I don't see them, I hear them. Bird parents are devoted. This pair seems to be putting all of their efforts into this lone offspring. Do they sometimes need help? Yes. But most of the time they need us to stand back, watch, listen and let them do their job.
Posted by Keri Dearborn at 12:47 PM No comments:

I drive a hybrid and I try to use sunlight as my light source during the day. But it turns out my office printer sucks as much energy in stand-by as when it is printing. By turning it off when I don't need it, I'm saving electricity.

The Union of Concerned Scientists is challenging us all to find 20 Ways over the next 20 Days to reduce our carbon use by 20%.
I took the short quiz about my daily habits and they generated a specific list for me with things I can do to reduce my carbon use. 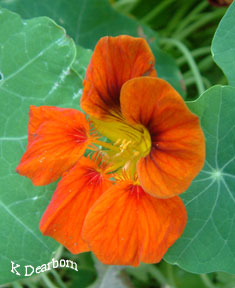 One suggestion concerned my activity in the garden; use woman power instead of generated power. This morning I quickly raked the grass I cut yesterday instead of getting the blower for a small job.


It's only Day One and I feel I've made a difference.

Check out the Union of Concerned Scientists 20/20/20 campaign at:
http://www.coolersmarter.org/

We are all part of solving climate change.
Posted by Keri Dearborn at 12:13 PM No comments:

Snake in the Yard 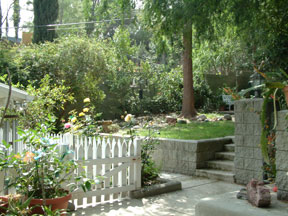 Some people might run screaming if they looked down to see a snake in their backyard, but for me it was a moment of soaring gratification.

Our yard is in the suburbs of Los Angeles. Most wild creatures have to be pushy to find a piece of real estate not overwhelmed by people. Gradually over the 19 years we have lived here we have restored native plants and tried to recreate habitat for California wildlife. Our goal was to create a wildlife refuge in our small yard.

And now a ring-necked snake, just a bit bigger around than a pencil and about 18” long, has arrived to hunt the young lizards and the salamanders. There is a natural balance settling over the yard. It  just proves that if you create habitat, wildlife will come.

Sorry there’s no photo. When I saw the snake moving gracefully through the grass, I thought about getting the camera. But I decided to just watch it gradually disappear into a bush and relished a moment of wildness in my “city” backyard.  Next time I'll take a picture, until then, check one of my favorite herp websites for photos CaliforniaHerps.com
Posted by Keri Dearborn at 8:16 PM 1 comment:

Conservation organizations that successfully save wildlife also engage with the problems faced by the people that are neighbors with endangered plants and animals.


One of the organizations that I have tried to emulate with my work with Friends of the Island Fox is the Snow Leopard Trust. SLT creates programs that support mountain herders so that they are less likely to regard the endangered snow leopard as an obstacle. We saw some of the villages where they are making an impact when we were in Mongolia. I love the camel yarn and yak wool produced by the women of Snow Leopard Enterprises, a program of SLT.


One of SLT's successful research efforts includes camera traps that take photos of wild animals as they near the camera. With this technology they have documented mother snow leopards interacting with their cubs, identified individual animals and their territory, and now they have documented a snow leopard preparing to bed down for the night. You can watch the images of a wild snow leopard curling up on a rocky trail to sleep for the night Snow Leopard Video.


Snuggling into a warm bed; every night, all over the world, creatures large and small find a safe place to sleep. The more we know about the Earth's creatures, the more we can see how similar we all are and how we all share basic common needs.
Posted by Keri Dearborn at 9:00 AM No comments:

Santa Cruz Island - A World Away and Right Next Door

Sometimes you don't have to go far to experience a different world.

Santa Cruz Island is larger than the island of Manhattan. It is part of Channel Islands National Park and home to many rare and endemic species. Yet, few people visit this island only 26 miles off the coast of busy, bustling Southern California.


A day trip out to Santa Cruz is like traveling back in California's history, when people were few and weather and sea molded the landscape. Last Thursday we took a trip on an Island Packers boat to Prisoner's Harbor on Santa Cruz Island.

There were sea birds, dolphins and migrating gray whales (including a gray whale calf). Picture of bottlenose dolphin with calf.

The wildflowers were in bloom.

And we found the tracks of an endangered island fox.

Santa Cruz Island was greatly impacted by the ranching of domestic sheep, goats and pigs during the 20th century. These large herbivorous animals nearly grazed the island to death. Today all of the domestic animals are gone and the wild plants and animals are making a strong come back. Before the day was over we saw not only the rare island scrub-jay, but also a healthy island fox.

I'm the Education Director for Friends of the Island Fox. We've worked hard supporting conservation efforts to save this tiny rare canine from extinction. Just 12 years ago, you could not see an island fox on the northern islands running free in the wild. Only 15 individuals survived on San Miguel Island, 15 on Santa Rosa Island, and less than 100 on Santa Cruz Island. To see a healthy island fox in the wild at Prisoner's Harbor was a thrill.  For more about the island fox, visit www.islandfox.org

The Channel Islands are also home to numerous bird species including island subspecies. Here's My Bird List for 3/29/2012 to Santa Cruz Island:


Posted by Keri Dearborn at 6:33 PM No comments: