Some people can put out a bird house and have it occupied immediately. I call that blind luck. I’ve tried a number of bird houses: wooden, gourd, rope, square, round, oblong.

I’ve had woodpeckers spend the day enlarging an entrance hole, only to have a mate take one look at the structure and say “Ummm, no.”
Last year the male Bewick’s wren built a nest in both a gourd and a coiled “lasso” bird house, but the female was not impressed with either.

For three years I’ve been putting out a titmouse house. The oak titmouse is a smallish gray bird with a crest. As cavity nesters who do not make the cavity themselves, the titmouse is dependent on finding old woodpecker cavities in dead trees. Such real estate is hard to find. City-dwelling humans readily cut down old and dead trees. With few nesting sites, the oak titmouse is in decline in southern California.

With this in mind, I purchased a bird house specifically designed to meet the needs of the titmouse pair that frequent my backyard. Many birds have a preference when it comes to bird house size, opening diameter, location height, and the direction the opening faces.

I came across a Cornell University publication that said most cavity nesting birds prefer their houses facing toward the northeast. With compass in hand, I aligned my houses. I raised the height, lowered the height. Put them in open areas, relocated them to overgrown areas. Occasionally, birds would do walkthroughs, but no one moved in.

When I read the titmouse prefers a nesting height between 11-15 feet. I went out and moved the nest box again. Within a few weeks, Bewick’s wrens moved in.

I think the deciding factor for the wrens was I had also added insect-laced suet to one of my feeders. The wrens were immediately attracted to this offering. For busy parents this was a readily available and dependable food source.

The wren pair worked diligently bringing food to their nestlings and once the youngsters fledged, taking them around the yard showing them where to hunt for insects. It was wonderful to watch the wrens as they raised two broods this spring in the titmouse house. 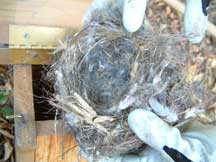 Now that everyone has fledged, it is time to be a good landlord and clean out the house.

It is amazing how two tiny wrens can build such an elaborate structure using only their beaks. The bottom layers are sticks, then twigs. Once they built up the height of the floor to the right depth from the entry door, they made a nest of soft grasses and leaves with a lining of dog hair and tufts of squirrel fur.

I thought the wrens were just chasing the squirrels to keep them away from the nest. Now it looks like they were actually plucking tufts of hair from squirrel tails. 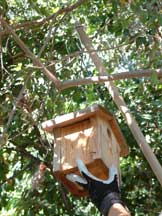 It is amazing how clean the nest is. The parents take out the droppings in bundles and dispose of them away from the nest. This makes it harder for predators to find the hidden nest.

After cleaning it out, I carefully replaced the bird house back in its successful location. The wrens may be back next spring, but I have to admit I’m still hoping for the titmouse pair.

You don’t have to have a bird house to have nesting birds. Hummingbirds, California towhees, orioles and larger hawks build nests in trees and bushes. This year alone we had:

Adding shrubs and trees to your landscaping will increase the real estate appeal for nesting birds. Provide reliable water and food, and your avian neighbors will abound.
Posted by Keri Dearborn at 1:15 PM 3 comments:

A Deer A Day

In the past few months we’ve traveled by car across about 1000 miles of Turkey and nearly 1000 miles of California. Both have similar climate and terrain, and we explored both inland and along the coast. Each has large metropolitan areas, agricultural regions, and protected wilderness–but there was a stark and eye-opening difference. We saw NO wild mammals during our travels in Turkey. None.

You may be saying, well, but really what wild mammals do you see traveling Interstate Highway 5 through central California?

Traveling for five days in California, including driving the “barren” and straight Highway 5, we only had one day when we didn’t see at least one mule deer. 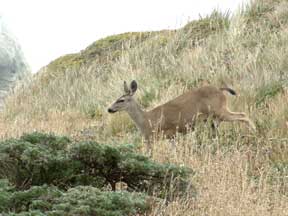 For the past 15 years, I have kept travel diaries. Each day I record the wild animals species we see. Driving from Los Angeles to Sonoma County in northern California and through Sonoma to the coast, over the course of five days we saw:Plus:
In both Turkey and California we saw numerous species of birds, but still more in California.

The most obvious reason for this difference in wildlife is that humans in large numbers have lived longer in the Mediterranean than they have in North America. People have farmed, hunted and harvested natural resources longer in Turkey and have had a more deleterious cumulative effect on the land.

What we have in North America, and especially in California and the Pacific Northwest of the U.S., is a treasure of plant and wildlife. Our increasing population must make important choices:
OR In the United States we have laws to help us preserve the glorious bounty of plants and creatures, but private citizens must make their voice heard to enforce those laws. The Endangered Species Act and the Migratory Bird Act both afford protection to creatures, plants and habitat, but our wildlife protection agencies have been financially cut to the bone by our current political leaders.

You and I are the eyes and ears that must report offenders that destroy our precious natural world.

When I read “All Birds Deserve A Safe Harbor” by Kimball L. Garrett and Kathy C. Molina in the 7/12/06 L.A. Times about Caspian and elegant tern nests and fledglings being maliciously destroyed and killed, I decided it was time to step up and demand that other living things not be destroyed for human convenience.

Most of the birds in your neighborhood are protected by the Migratory Bird Act (check the list). City tree trimmers can not hack down trees during nesting season, destroying nests and baby birds. It is a violation of the Migratory Bird Act. Violators can be fined up to $15,000. Betty Dunbar of Huntington Beach, CA, has persevered in getting that city to not trim city trees during nesting season.

Saving tigers and elephants is important, but look around you. How much of the native habitat and its animals are gone from where you live? We can’t ask Asian and African peoples to preserve their wildlife if we aren’t leading by example.

Be informed about endangered and threatened species living in your area: Southern California -

Posted by Keri Dearborn at 9:55 AM No comments: 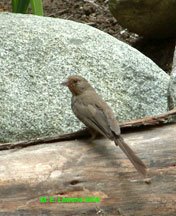 The red-shouldered hawk fledglings have learned to fly. They are off hunting the hillsides with their parents. The Bewick’s wrens have fledged. A tidy compact oval, delicately lined with black dog hair, tucked on top of a bed of sticks is all that remains in the nest box.

We recently discovered the California towhees nesting in an oleander bush. Despite our rude trimming of a few branches, the pair is still keeping house in their somewhat less hidden nest.

The summer days are long and hot. Nearly every day is over 100˚F. Birds of all shapes and sizes are stopping to drink and bathe in the birdbath. (Some of them are furry and brown with a long fluffy tail. Fox squirrels are also drinking from the bath.)

To hear more about how your backyard habitat can be an important oasis for wildlife, check out the third installment of the interview I did with Douglas Welch of “A Gardner’s Notebook.”

We hope to start our own podcast in the near future, beginning with our adventure on Santa Rosa Island. We stood beneath a stand of Santa Rosa Torrey pines, some of the rarest pine trees in the world. Stay tuned.
Posted by Keri Dearborn at 5:00 PM No comments: