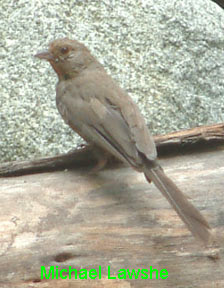 This weekend is the Great Backyard Bird Count !

Across North America, citizens are playing a vital role for science by counting wild birds like this California towhee.

Why is this important?

Bird counts turned in to the Great Backyard Bird Count website will create a snapshot of bird populations across the continent.

You can participate by counting birds in your backyard, on a walk through your neighborhood, in a local park or wildlife area. See the website http://www.birdsource.org/gbbc/ for easy instructions. Be a Citizen Scientist and help count birds in your area.

When and where are birds nesting? If you have a nest that you are watching, NestWatch wants YOU ! You can enter your information about a bird nest at www.nestwatch.org.

This beautiful February morning dawned with clear blue skies, warm sun filtering through leafless elm branches and a variety of birds chatting at the bird feeder. I took an hour this morning to prune back some shrubs and reconnect with earth and reality. Too many hours have been spent lately sitting at my desk churning out words for the sake of academia.

When Michael and I were done snipping and trimming, the lavatera and the Lady Banks rose were once again contained and no longer trying to engulf the bird feeders. The area was open and sunlight streamed in.

The house finches and mourning doves took advantage of improved sightlines and swarmed the feeders. A large shadow swooped over Michael and he said, “Was that a hawk?”

The family of band-tailed pigeons were arriving in a second feeding wave. As we went into the house, the five large birds vocally jostled for the four positions at the feeder.

Then suddenly birds exploded out of the yard, flying out over the house. Doves, finches, and band-tailed pigeons fanned out over the neighborhood with a Cooper’s hawk in quick pursuit. The Cooper’s hawk dove. It hit a bird a few feet from the neighbor’s house. There was a loud SMACK. Wings and feathers swirling in struggle. The hawk flew up into a sapling tree. The neighbor come running out of the house. The Cooper’s hawk retreated to the peak of the garage, watching anxiously. Tentatively, it flew up into a nearby tree.

I watched this all from the window. When the neighbor started across the street toward our house, I knew that a Nature Intermediary was needed.

The fleeing prey bird had hit the neighbors window. The hawk and its intended brunch had tussled, right in front of her. The injured prey had momentarily escaped and was cowering in her front yard. What the neighbor didn’t know, was the hawk was sitting just above us in the tree, frustrated. I explained to the startled human what had happened and knelt down to see the same young band-tailed pigeon that had been feasting in the backyard, pressed against the side of the house.

There was blood in its beak, but it was able to fly a short distance. I took off my shirt , covered its head and scooped it up in my hands.

This is the role I play for my neighbors, accessing the damage after a pet dog had grabbed a wild rabbit, cautioning about the timing of trimming a tree because of the red-shouldered hawk nest with hawklets, identifying native plants, and clarifying that the canine loping down the street is not a dog, but a coyote. Now I was pointing at the Cooper’s hawk and explaining that the hawks that circle over our little intersection aren’t someone’s pet birds, they are wild creatures hunting for food.

As I look out at the houses of my immediate neighbors, the reality is, of the twelve adults in these six houses, only four of us grew up here in California–four are foreign born and four are from other parts of the United States. The picture of what California was before our population doubled and tripled, is a memory that resides in fewer and fewer of us all the time. And even many native Californians are removed from the place itself. Few truly notice that the hawk numbers have grown dramatically since the banning of DDT in the 1970s.

I took the stunned, yearling band-tail pigeon, home. I found a quiet, familiar spot in the backyard, near the bird feeder where a half hour before she had stuffed herself with food. She was just starting to get her adult feathers. It was probably a combination of being weighed down with a full crop and molting some of her flight feathers that had made her just a bit more vulnerable than the other members of her family.

There was a lively glint in her eyes and at first I thought my initial assessment had been wrong. Maybe she wasn’t as injured as I suspected. As we sat beneath the elm tree, I contemplated whether she might be able to sit on a tree branch. Then the glint of life fluttered. Breaths became short and shallow. The young flame of life tried to hold on, but quietly it faded. In a quiet, still moment the spark within the gray warm body went out.

I held her until the warmth of her began to cool. This gentle piece of who I am, this calm peace with the earth; no good, no bad, just the cyclical nature of life. If everyone would just slow down, open their hearts and live such a moment, it would make us better members of the biosphere that is the earth.

Life can be difficult, unpredictable and fleeting.
Posted by Keri Dearborn at 2:00 PM No comments: