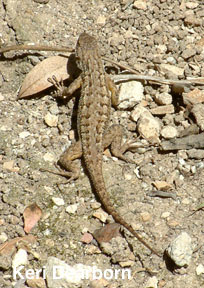 Spring doesn’t just warm up the ground for seeds to grow and flowers to bloom. The sun heats the rocks and gravel and invites the lizards to emerge from their winter hiding spots. The most visible lizards in our yard are Western fence lizards (Sceloporus occidentalis). There is a pair in the herb garden and this large individual in the driveway. They seem to prefer elevated basking sites where they can keep an eye on their territory and watch for insects.

The female in the garden frequently jumps up several inches to catch flies. She’s an efficient insect eliminator and fun to watch. 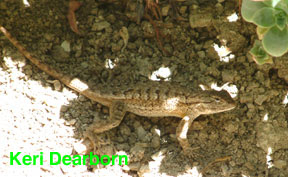 You may know these lizards as “blue-bellies.” Males, especially, have bright patches of blue on their bellies and sometimes at the throat. The fence lizard does push-ups displaying his bright breeding colors to admiring females. The brighter the blue, the healthier and more attractive the male is as a mate.

We haven’t always had lizards in our yard. When we first moved in, garden snails infested the African daisy planted along our front hillside. Blindly, we used the box of “snail bait” poison left behind by the previous homeowners. Did it get rid of the snails? No. It would decrease them for a while, but then they would multiply and return in greater numbers.

When the poison ran out, we tried beer traps, copper strips and a variety of organic methods. After several years of “Earth friendly” snail deterrents, we began to notice there were fewer snails but it wasn’t because of anything we were doing. Something was eating them.

Now that our snails were “clean” and tasty, predators were picking them off. A skunk was crunching them on the porch and alligator lizards (Gerrhonotus multicarinatus) moved in to dine as well.

As we remove the African daisy and replaced it with native plants, we have less and less non-native garden snails. The snails don’t like the thick waxy leaves of the ceanothus or the aromatic taste of sage. But these native plants have attracted native insects.

In May of 2004, we spotted the first western fence lizard in the yard. Since then, there has been at least one batch of youngsters. Rock piles and concrete walls soak up the sun’s rays and create warm stopping places for lizards. The nooks and crannies between the rocks make it easy for a lizard to hide from a hungry red-shouldered hawk.

A place to live and a safe food source were all the lizards needed to move in. Western fence lizards patrol the herb garden, eating a variety of bugs. They warm themselves on the driveway and run up the walls, clinging with their long strong toes.

If you have western fence lizards as neighbors, they are protecting you from potential disease. What other wonders are these lizards capable of? Who knows. Perhaps they carry a natural antibiotic in their blood like Komodo dragons or American alligators that could be beneficial to humans.

For now, I’m happy to watch them basking in the garden. And to inspire them to stay we’ve created a few more rock piles and added some novel resting places. The female fence lizard has moved into a dark-colored, resin gargoyle-shaped drain spout. For a lizard it’s a cool place to live.
Posted by Keri Dearborn at 5:58 PM 3 comments:

Well, there is no doubt about it. Having the scrub jay frequenting the yard made our little female Allen's hummingbird reevaluate the nest she created on top of her mother's deserted nest from last year. (See the nest)

She stayed away and abandoned the tiny lone egg. When I checked the nest late Tuesday night, there was no mother incubating and the cool temperatures were too much for the egg to survive.

When I checked the nest Wednesday morning, the egg was gone and the side of the nest was slightly torn–probably by a bird larger than a hummingbird sitting on the edge.

Some nests are made in unsuccessful locations. This was the second batch of eggs lost in this one specific nest site.

The fascinating thing to me is this tiny hummingbird with a brain the size of this "O" realized she had made an untimely choice. Rather than fight against brutal odds, she abandoned her hard work rebuilding the nest and the resources committed to the egg. She let it go.

Then she disappeared for three days. Where did she go?

I think she went off to mate again. She's back now and fervently trying to drive off her last batch of youngsters. She's also building a new nest somewhere in the holly cherry shrubs. I haven't spotted it yet. This time she is being very secretive.
Posted by Keri Dearborn at 2:47 PM 1 comment: 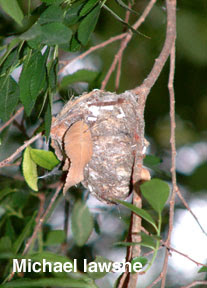 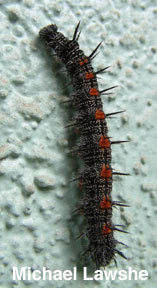 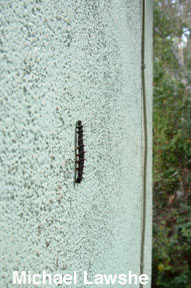 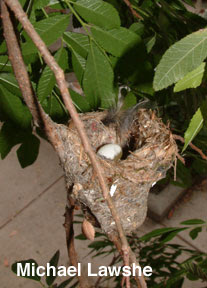 Life is a delicate dance. The living constantly effect each other. The weather benefits some and challenges others. No action or inaction is without effect.
Posted by Keri Dearborn at 1:53 PM 1 comment: 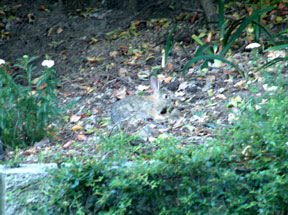 We had a neighborhood rabbit–a desert cottontail to be exact. She would trot through the hillside planter in the morning or graze the driveway grass in the evening.

Sometimes we went days without seeing her and I would worry that one of the hawks or owls had caught her. A lone rabbit only has two eyes and two ears to watch out for danger.

I wondered how she came to be in our neighborhood. We are adjacent to the Santa Monica Mountains, but several lanes of houses barricade us from the majority of the mountain residents. We do not have deer, quail were a first time excitement this September after 14 years. The coyotes, however, do frequent the streets even though we are only two short blocks from one of the San Fernando Valley’s busiest boulevards.

When the rabbit first appeared about two years ago, it was small–a youngster. It grew up wandering between several houses. It must have been crossing the street, but it seemed to have found a way to do so safely.

Unfortunately, a neighbor just came pounding on my door. His dogs had caught the bunny in his backyard. Could I come and see if anything could be done? I rushed over with him.

There was my morning friend laying quietly on her side. I felt for a heart beat. There was none. The soft fur was still warm with her last breath. Life was easing away. I stroked her gently and hoped her passing was quick.

For a wild rabbit she had lived an unusual life, solitary, virginal and fairly long. She had avoided predators and suitors. She was healthy and loved by the humans who’s homes she visited. Did she eat my garden lettuce to the ground? Yes. But there were a few fancy greens she didn’t like and therefore left those for us. She also hopped casually between the ferns and made the yard a calmer more beautiful place.

One small wild rabbit has returned to the Earth and for many of us there is a small empty place in the world.
Posted by Keri Dearborn at 5:58 PM No comments: