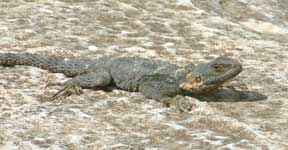 Something is watching–something still, silent, ancient. Dark eyes glare from beneath a ridged gray brow.

How long had they been studying me? What were they thinking?

In the Temple of Apollo, on a hillside in Turkey, a gathering of starred agamas (Laudakia stellio) stood their ground. They observed–heads raised, muscles tense. Their clawed feet clinging to the stones surrounding the heart of the temple, the site of the oracle. For centuries, humans had come to this place asking questions, seeking wisdom.

I took a slow step forward.

The largest among them, an adult male, gazed right through me. The female, lifted her head, stretched her neck, making her nearly foot-length body appear even longer.

Climbing the marble steps and descending into the inner vault of the temple, my attention had been riveted on towering columns and rising marble walls. I had looked right past the prickly gray creatures that seemed as one with the weathered stone. But now I was face to face with these guardians of ancient truth.

After the Greek engineers and architects had spent their brilliance and later generations promoting “modern” beliefs had lost the genius of these ancient pagan builders, who was left to guard the old ways? The starred agamas.

Agamids in general are considered one of the oldest families of lizards. They have primitive teeth and tails that typically can not be regenerated if broken. They are ambush hunters who stoically wait for prey. When a starred agama visually spots an ant, bee, or wasp, they move quickly to capture it in a single bite. While agamids range throughout Asia, Africa and Australia, only one group is found in Europe, Laudakia stellio. There are various subspecies of L. stellio in Turkey, Greece, Cyprus, Egypt, Lebanon, Iraq, but they all share a large head with a visible ear opening, a long tail composed of segments with evenly spaced spikes, and a generally flattened body. They also frequent ruins–the ruins of ancient human civilizations. Coincidence? I wonder. 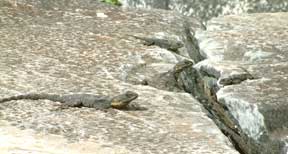 The lizards before me were displaying a high level of territoriality, typical of agamids. The ruff of jagged scales around the neck stood out, especially on the female. But what was she guarding, just a crack in a piece of marble? Then I realized this was not a haphazard group of lizards, there was an adult male, adult female and numerous subadults of varying sizes. (The male is to the left, female on the left edge of the crack, one youngster just to her right and one just above her head to the left.)

A researcher has recently determined that similar groups of Cunningham’s skinks in Australia are actually family groups, where offspring stay with their parents for up to seven years. Was this a family of starred agamas? There are suggestions in the scientific literature that they may form family groups, but no one has really studied the topic.

I took a slow step forward. The female and the youngsters dashed for the protection of the stone crevasse. But the male stood his ground. Beneath the rays of Apollo, the starred agama and I came to an understanding, we both revered the warming fingers of the sun on this cool spring day. Basking was something we had in common.

As I laid a reverent hand of the warm marble, the energy of the place filled me. “Open your heart,” the oracle said, “and you will find your place in the world.”

As we traveled through numerous ancient sites in Turkey, I spotted starred agama families time and time again. Most human visitors seemed to overlook these reptiles among the tumbled-down stones of ruins, just as they overlooked the subtle power of these ancient places. We humans like to think we know so much. But who has been watching whom longer. The starred agamas stand in witness over our lost past. Perhaps they know us, far better than we understand them.
Posted by Keri Dearborn at 5:51 PM