Dance of a butterfly.

Bite of a fox.

Mysterious, malicious, misunderstood. Why is it that Western culture thinks so poorly of bats? These hunters and pollinators of the night are vital for controlling populations of insects, especially mosquitos, and instrumental in pollenating fruit crops like banana, mango and avocado. Mother bats are devoted to their offspring and some species will provide food to injured individuals even if they are unrelated, a trait all too infrequent among humans.

Two out of every 10 species of mammals are bats–only rodents are represented by more species. I’ve seen bats at twilight in Istanbul, skimming over a lake in northern Canada, and a friend saw one from the top of the Eiffel Tower in Paris. Bats are found globally except at the poles.

As a child in Los Angeles, I watched them slip in and out of pools of lamplight in the park snatching insects on the fly. Now when I walk at dusk, I see only one or two bats patrolling our neighborhood streets. As mosquito-born diseases, like West Nile virus and malaria, become growing threats you would think people would embrace mosquito predators like bats. Instead, the shortsighted solution is to spray toxins that effect the food web and have short-term effects on the mosquitos.

Bats can live ten to twenty years, with a documented longevity of thirty-two years for a wild little brown bat, while mosquitos typically live 10-100 days. Kill off a generation of bats and mosquitos at the same time and the mosquitos will be back in swarms before the bats can attempt to recover. The resilience of insects to toxins makes this situation even worse. Even the U.S. Center for Disease Control states “There are over 125 mosquito species with documented resistance to one or more insecticides.”

Are there any mosquitos with resistance to bats? No.

A few years ago a mixed colony of big brown bats, little brown bats and Brazilian free-tailed bats were discovered at the Los Angeles Zoo and Botanical Gardens. Here, in the heart of Los Angeles, 100 - 150 bats set out on their summer-evening foray into Griffith Park and along the Los Angeles River to hunt insects. 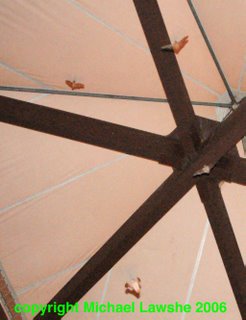 It isn’t the spectacle of Carlsbad Caverns or Congress Avenue Bridge in Austin, Texas, but watching the small colony emerge in the twilight is exciting. This was the second year Zoo Docents have hosted a Bird & Bat Walk for Zoo members.

Each of the three nights unfolded with similar magic:

As twilight approaches a few bats drop from their daytime roost. An electronic “bat detector” lowers the frequency of the bats' ultrasonic vocalizations to clicks so we can hear them. A few scattered clicks alert us to the emerging “scouts.” They take a look around and then signal to the colony. If the air space is safe, if the barn owl or great horned owl isn’t perched nearby waiting, the clicks will become constant and over the next 10 minutes the majority of the bats will embark on their night of hunting.
Bat Walk slide show - see and hear the bats.

Watching bats is something I could do every night. So we have put up a bat box in hopes of attracting our mosquito-eating neighbors. We’ll keep you posted.
Posted by Keri Dearborn at 6:54 PM

did you manages to attract the bats with the bat boxes, I am thinking of investing in a bat box but want to make sure they will come.

Hello. Do you know anything about bats in the Baldwin Hills near LAX? There were a handful of species documented here in the 1980s (prior to the malathion spraying). I've been here for nine years (had a bat box for 5 years) and just saw my first bat last night. Very exciting. Recently set up a small backyard pond and the insect population (excluding mosquitos) has shot up. Perhaps associated.
PS: There is a bat-repellent ad posted on your blog page!

we have seen several bats in baldwin hills this morning. at about 6am. it is very exciting.

I have recently spotted a few bats at sunrise in Baldwin hills which made me very exited. I grew up with bats in Sweden but didn't expect them here in this dry climate.
I will be on the lookout at sunsets, to hopefully see more activity.

we live in the mid-city west area of los angeles and attached a bat house to the roof in december. still waiting for the bats to find it.

Just discovered a bat in my apartment building tonight. Looked for info on bats in LA and found this post. I'm perplexed that it hasn't taken off to go look for bugs since it's after 11pm as of this typing.

I think saw a flock of bats over the L.A. river by Griffith Park at about 7am on a foggy day.

There were about 20-30 of them. Does that sound typical? I've noticed them during my commute before.

I meant to say that I NEVER noticed these potential bats before on my commute.

Most likely these were swallows or swifts rather than bats. For more on how to tell the difference between birds and bats check out my recent post "Is That A Bat or A Bird" http://animalbytes.blogspot.com/2011/11/is-that-bat-or-bird-flying-over-la.html

I live fairly close to the Coliseum in Los Angeles. I want to make the best type for my location. How can I encourage bats to use a box if I put one out.

Have to admit that I have never been successful convincing bats to move into my bat house. For expert tips on bat houses, I suggest Bat International http://www.batcon.org/resources/getting-involved/bat-houses