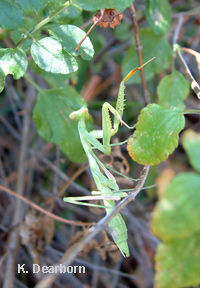 The praying mantis is a vital garden predator; the equivalent of a mountain lion in the chaparral insect world. As a top predator, it helps to keep a natural balance of pollinating, plant-eating and decomposing insects in our restored habitat.

Too often, these predator insects are imported. I have done it myself at times when native species of praying mantis and ladybugs were rare in our yard. I have also guarded egg casings to help make sure that these predators reproduced in our yard. 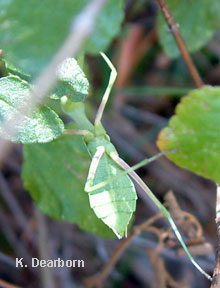 When I spotted this praying mantis, it looked unusual. The wide abdomen and short wings made me think it was an introduced species–such as a Chinese mantis or Carolina mantis.

Much to my surprise, the deeper I went in to the Bug Guide, the more I realized this is actually a California mantis (Stagmomantis californica). It has been so long since I have seen one of our natives in the yard, I didn't recognize it. I believe it is a female, because of the large size of the abdomen. (male vs female mantids)

Where did I find this native mantis? It was on one of our native sages, hunting for native insects. Native plants are vital to native insects of all kinds.
Posted by Keri Dearborn at 2:07 PM

Keri, I think what you have here is Stagmomantis limbata, a southwestern species that has worked its way into California, and is becoming more widespread. Speaking of "widespread", one way you can tell a limbata from its smaller californica cousin is the extra wide abdomen of the female. It also tends to be more solidly colored and less mottled than the californica, although both species can be variable in their coloring. The wings of the adult female limbata are a little longer than californica, but are still not full-length.

Male limbata are similarly a little larger than their californica counterparts, and tend to be a little more colorful.