I'm always happy when I find a new Allen's hummingbird nest. I know this egg was laid this morning because it wasn't there yesterday. A second egg will probably be laid tomorrow or the next day. It typically takes 19 days for them to hatch.

This nest is actually last year's patio nest refurbished. The nest is a bit incomplete and even unstable, but that is a trait of this female. She is a bit haphazard in her building and her mothering. I knew she was rebuilding the nest, but it didn't seem finished. The egg this morning caught me by surprise.

This female was successful with her first nest last year. The second attempt both chicks perished just after hatching and the third attempt came too late in the season. The chicks did not survive the multiple days of temperatures over 100 degrees that we had in late June into July. Despite our attempts to provide shade, the heat was too much.

We've had two nesting attempts by other Allen's hummingbirds this season. One chick successfully fledged on March 14th. The other nest with two chicks was taken by an unknown predator. March is typically when second nesting attempts are started, but we are way behind the 5 successful chicks by March 2019. Nests 2019 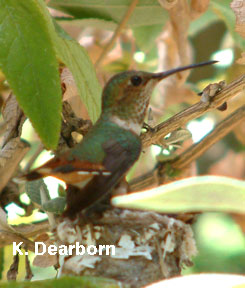 The weather has been cold. Most females have waited to nest.

I discovered a fourth nest a few days ago, in a location also previously used. This female has a type "A" personality. Her nest is pristine. She was on the nest constantly for the past four days. She was keeping hatchlings warm in our cooler than usual weather. So on this first Monday in spring - one hummingbird egg and two tiny chicks.

Posted by Keri Dearborn at 1:54 PM