The Joys of Providing Wildlife Habitat 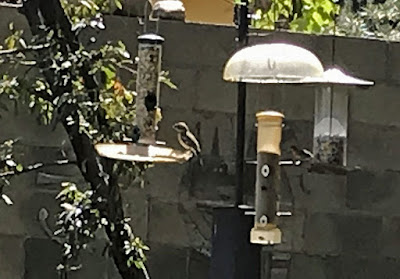 This morning some traveling friends stopped in for breakfast. Three migrating black-headed grosbeak (Pheucticus melanocephalus) were at the bird feeder. (A female is sitting on the right side of the tube feeder above.) They have spent the winter in Mexico or Central America and now they are headed north. They may nest somewhere near-by or they may migrate all the way up to British Columbia, Canada.

It's rewarding to know that they can find our oasis of habitat in the sprawling suburbs of Los Angeles. For more than ten years, black-headed grosbeaks have been stopping here for food and water as they pass through in April and then again in late July or August as they head south. I know this because I keep track in a bird journal. 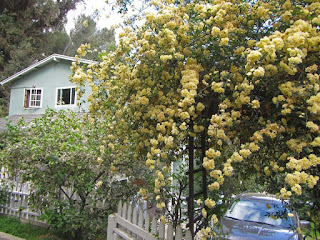 Especially when the California hillsides are dryer than they should be, our yard provides food, water, and shelter for these migrants to stop and rest for a few days.

The birds who live here year round are nesting. The native plants are providing nectar for at least four nesting Allen's hummingbirds. 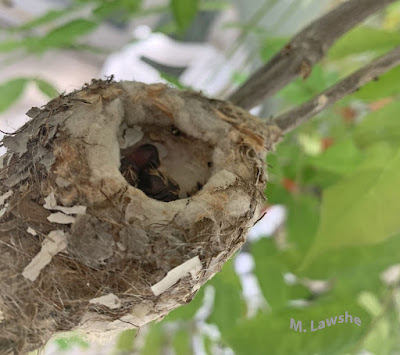 These Allen's hummingbird chicks hatched on April 10th. (The nest wasn't finished when the first egg was laid.) If you look closely you can see the bits of eggshell inside the nest cup just to the left and above the naked chick. 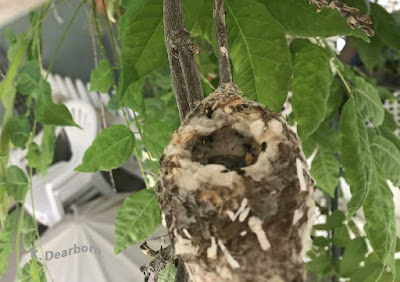 Two full days old and the chicks still have closed eyes, but they raise their little beaks to be fed whenever a shadow falls across the nest. (See the tiny beak raised for food.) This nest is on our patio. 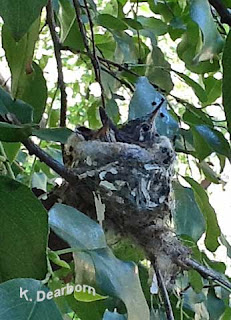 Another female nesting in a native hollyleaf cherry shrub in the front yard urged her fully feather chicks to fly on April 10th. (She has been successfully nesting in our yard for several years.)

So far in 2021 we've had four Allen's hummingbird nesting attempts. Two were successful - one with one chick and the other with two chicks.

Creating wildlife habitat is vital for migrating and nesting birds. Too much of their native habitat has been developed and changed. We have watched our yard transform from a sterile suburban yard to a small wildlife reserve. Birds in California face a huge loss of habitat due to development and climate change. You can make a difference with native plants and water.

Posted by Keri Dearborn at 7:20 PM